The armed groups within Burma crawl closer to an NCA 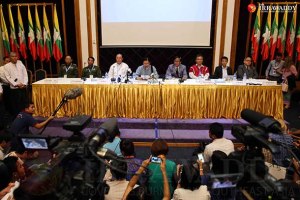 All of the ethnic people know well that much has to be done before a genuine and long lasting peace can be achieved. For the Karenni people, it has been a long wait for a long lasting peace. The conflict in Karenni State has been ongoing for over 60 years and there has only been a Burmese government and KNPP ceasefire since 2012.

The KNPP wish to participate in nationwide ceasefire talks before moving on to peace talks with the Burmese government. The KNPP and other ethnic armed groups have joined together in the Nationwide Ceasefire Coordination Team (NCCT) to try to achieve this. The reason the ethnic armed groups are pursuing a nationwide ceasefire is due to years of distrust with the Burmese military using ceasefires to marginalize groups and pursue conflict with different groups.

Despite global plaudits, the UN special adviser on Myanmar called it “A historic and significant achievement”, the agreement is now only in its draft stage. Before being accepted, the UNFC must wait for approval from all of its members. Many ethnic groups have reservations about putting pen to paper as conflict continues in the country. Additionally, a signature may do little to contain a Burmese regime experienced in mistrust and broken promises.
Unfortunately for the Karenni people, it appears many challenges lie ahead and the real meaning of this draft nationwide ceasefire accord is difficult to quantify. Serious conflict continues in the northern areas of Burma with the Kokang area being a clear example of the instability of the country.

Karenni people are still wary of trusting the government and even with slow and gradual progress in the ceasefire talks, little will change their opinion if fighting on the ground in Burma continues. The only true way to bring stability to the country will be when the Burmese military put down their arms for good.