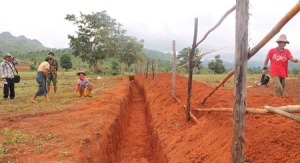 A trench being dug around confiscated land

Land confiscation is an important issue in Karenni State and Burma. One area where protests and activism are currently taking place is in Solyaku village, in Hpruso Township, Burma.

The land in Solyaku village was confiscated over ten years ago. On July 8th 2014, organisations within Kayah State released this statement.

There has since been a plowing protest on the 27th May 2014.  Later during August, the villagers sent a letter to military chief, Aung Hlaing asking for help. After this, the military replied that they would not return the land and if the villagers farmed it, they would destroy the land.

We will continue to provide links to any new articles that come up on this issue as well as any work or information that we personally find.